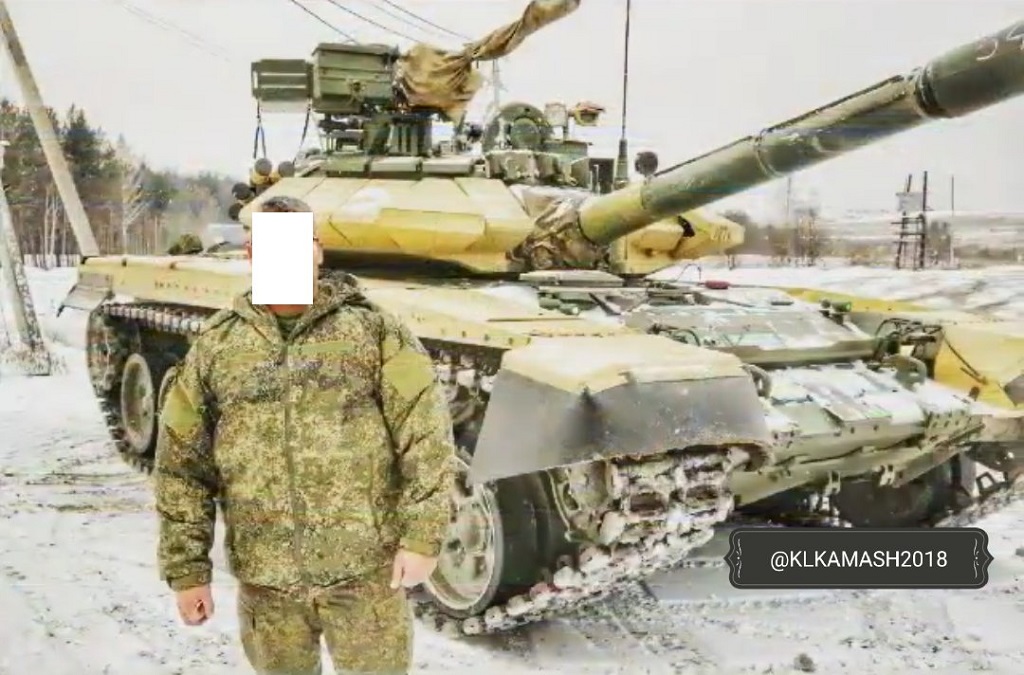 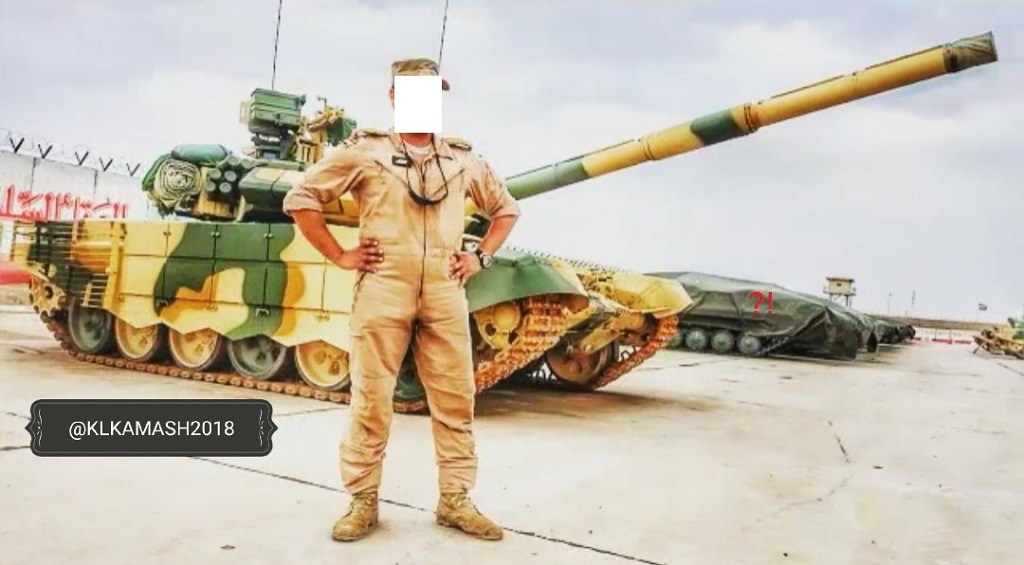 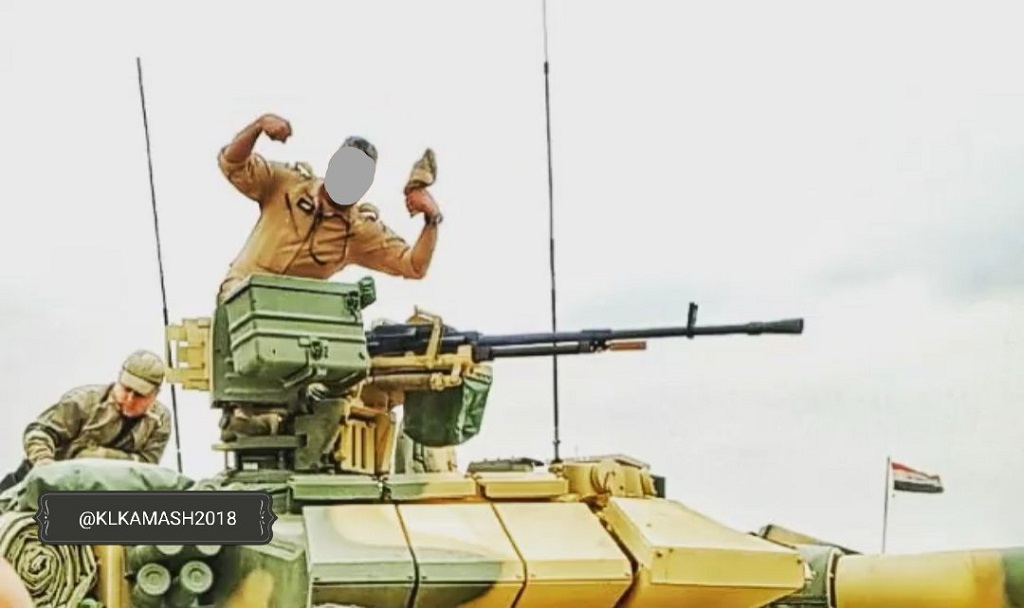 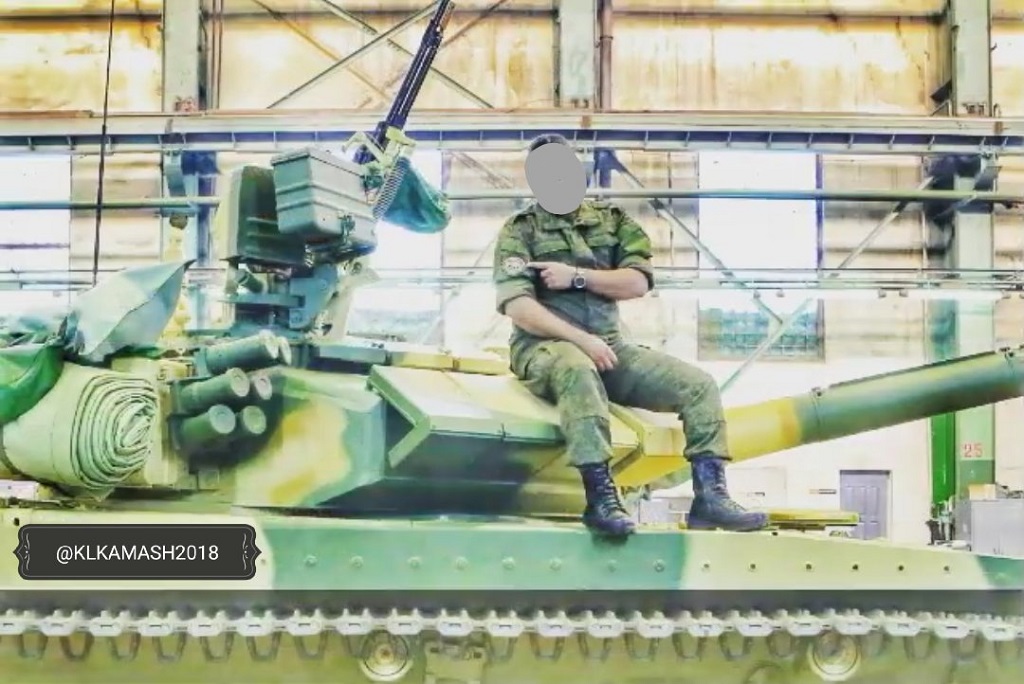 it is a shame they don't have the SOSNA-U panoramic sights. I don't know why Iraq refuses to buy panoramic commander's sight both for Abrams and T90!
أعلى

hayder كتب: ↑
الجمعة يونيو 01, 2018 12:19 pm
it is a shame they don't have the SOSNA-U panoramic sights. I don't know why Iraq refuses to buy panoramic commander's sight both for Abrams and T90!

nice so now we know that the 35th Bde has been rearmed with T90S tanks (29 units in 2 battalions). The Abrams tanks previously in the 35th bde have been moved to the 34th Bde.
أعلى

The Iraqi Ministry of Defence (MoD) announced the decision to swap the US-made tanks for Russian ones on 6 June, saying 39 T-90S tanks had been handed over to the 35th Brigade of the 9th Armoured Division to equip two battalions. It said the units’ officers and crews had been retrained with Russian assistance and their Abrams tanks transferred to the division’s 34th Brigade.

The 34th Brigade has been seen operating T-72s, the tank from which the T-90S was developed.

It was confirmed in 2017 that Iraq had ordered 73 tanks in the basic T-90S standard and the associated T-90SK command variant. The Iraqi MoD announced in February 2018 that 36 had been delivered.

I don’t understand why , wouldn’t it been easier to just give the tanks to the 34 th . Instead of given it to 35 th . Which have had experiace in using the m1 in battle . Very strang ???
أعلى

34th Bde also operated M1s already... I am guessing that the T-72s from the 34th were now relegated to some of the mechanised units (5th, 10th, 11th divisions).
أعلى

But lots of other stuff is not clear... if they receive BMP3M... I suspect those will go to the 37th BDE.
أعلى

The 35th Brigade of the Iraqi Army's 9th Armored Division has replaced its M1A1M Abrams main battle tanks with Russian T-90s. The US media have claimed that the decision was the result of Pentagon concerns about the Abrams falling into the hands of Iranian-backed militias. However, Russian observers say the T-90 is simply a better tank for Iraq.

Baghdad ordered 73 T-90 and T-90SK command tanks from Russia in 2017, with deliveries starting in February 2018. Last week, 39 T-90/SKs entered into service with the 35th Mechanized Brigade, a battle-hardened unit that had engaged Daesh (ISIS)* at the battle of Mosul and the battle of Kirkuk in 2016 and 2017, respectively. According to the Defense Ministry, the brigade's remaining Abrams have been transferred to the 34th Armored Brigade, which previously operated T-72s.

The US media have tried to put a positive spin on the swap, with journalists and analysts for The War Zone and Military Times saying the decision was based "at least partly" on US complaints about Abrams tanks being used by Popular Mobilization Units, Shiite militia groups supported by Iran, but officially designated as part of the Iraqi armed forces.

In February 2018, the Pentagon acknowledged that these militias had received access to at least nine Abrams, but added that the Iraqi Army had recovered all the tanks, a fact confirmed in May in a Pentagon report to Congress.

Is It Politics or Combat Capability?

However, according to military observer Vladimir Tuchkov, the Abrams-T-90 swap has less to do with geopolitics than it does with economics and combat capabilities in Iraqi conditions.

Iraq bought some 140 M1A1Ms beginning in 2008, with only 40 operational Abrams left by December 2014 in the midst of the Daesh onslaught. Washington approved an additional 175 tanks to Iraq, but anywhere between 48-80 were destroyed or disabled in subsequent battles against Daesh, according to the Iraqi media.
According to Tuchkov, a single M1A1M costs Iraq an estimated $6 million, compared to $2.5 million for a T-90S.

Secondly, given the fact that the M1A1M lacks the Israeli "Trophy" active protection system, which would enable it to defend against modern rocket-propelled grenades and anti-tank missile systems, geometric dimensions become an extremely important argument when it comes to survivability.

"The front profile of the Russian tank is 30% smaller than that of the American one," Tuchkov noted. "In other words, it's more difficult to hit, given that far from all shells are equipped with target-seeking devices. Approximately the same picture appears from the side profile, with the Abrams 1.5 meters longer than the T-90," he added.

Third, the standard T-90S comes with the Kontakt-5 explosive-reactor armor suite, which "copes perfectly well with modern TOW 2 anti-tank tandem rockets," in Tuchkov's words. As for the M1A1M, it lacks not only the strengthened depleted uranium layers in its front armor, but also the type of explosive reactive armor protection that would enable it to defeat the anti-tank weapons Daesh had at its disposal from the start of its offensive in 2014.

Finally, there's mobility. With the Abrams stacking up to nearly 70 tons vs. the T-90's 46 tons, the American tank is equipped with a 1,500 hp gas turbine power plant against the T-90's 1,000 hp diesel engine. Theoretically, the US tank has an edge, with a power/weight ratio of 23.8-26.9 hp/t compared to 18.2-20.4 hp/t for the T-90. However, in the desert conditions of the Middle East, where dust storms are a regular occurrence, the Abram's gas turbine engine is reported to have been a major headache for tank operators, requiring constant cleaning of its filters to prevent the engine from stalling. By comparison, the T-90's power plant has proven simpler, smaller, cheaper and most importantly, more reliable.

Upgrading to Russian Tanks; Why an Elite Iraqi Army Brigade Abandoned the Abrams for the More Survivable T-90

While the Iraqi military had for decades made use of advanced Soviet and Russian made arms, from Kornet anti tank missiles and T-62 battle tanks to MiG-25 interceptors and Su-22 strike fighters, the 2003 invasion by the United States and its allies which deposed the Ba’athist government of Saddam Hussein brought a new government into power which was heavily encouraged to invest in Western made arms. Fifteen years later, with the Iraqi military heavily engaged in war against a number of heavily armed Islamist insurgent groups, the most prominent of which is the Islamic State, the country’s ground forces have increasingly complained of the poor performance of U.S. made arms. The military has as a result begun to again look to Moscow to arm itself. With Iraq spending well over $7 billion on its armed forces annually, the country has been well positioned to acquire the latest and most capable Russian weapons systems, which have included advanced T-90 battle tanks for its ground forces.

Iraq’s M1 Abrams battle tanks provided by the Untied States, supposedly invulnerable armoured platforms, have suffered heavy losses against insurgent forces - often operating older handheld missile platforms with impunity against the American made tanks. A number of the battle tanks have reportedly been passed on to Iranian aligned militias, much to the chagrin of the U.S., and though the Abrams is arguably the most capable Western made battle tank in service and the only one in American service, the platform is increasingly being phased out of front line service in the Iraqi Army. With the Iraqi military expressing greater confidence in the capabilities of Russian made platforms, and having significant battlefield experience with both U.S. and Russian made battle tanks to test their capabilities, their strong preference for the T-90 over the M1 is a serious blow to the prestige of American armoured warfare units.

The Iraqi Ministry of Defence announced on June 8th that its elite 35th Brigade had taken delivery of 39 T-90S battle tanks to replace the M1 Abrams. The U.S. platform were transferred to the 34th brigade, which operates second rate Soviet era tank platforms and sees relatively little frontline action. According to Iraqi officials, Russian specialists had trained the 35th brigade to operate the new battle tanks. The fist T-90S battle tanks were delivered to Iraq in February 2018, and represents one of many orders placed for advanced Russian made hardware. One significant benefit of relying on Russian armaments for the Iraqi military, particularly in light of the election of the nationalist leader Moqtada Al Sadr who has taken a hard line against foreign influence in the country, is that it leaves Iraq more independent from both the United States and Iran - two major powers which maintain significant influence in the country and which are both more than willing to export their own hardware to the country. Reliance on Russia as a third party to provide arms has allowed Iraq to better assert its independence and maintain a military which relies on neither Washington nor Tehran for training, spare parts or servicing. Iraq has also made orders for Russian Mi-28NE Havoc helicopter gunships, Su-25 attack jets and Pantsir-S air defence platforms. It is also considering the purchase of the S-400 long range surface to air missile system, a move met with strong opposition by the United States. Other than Russia, Iraq has also increasingly turned to China and South Korea for arms which again serves to reduce its reliance on Iranian and U.S. equipment and assistance.

The T-90S boasts a number of significant upgrades over the original T-90, and though it is not as sophisticated as the T-90MS used by the Russian military itself it is still one of the most capable tanks currently available for export anywhere in the world. The platform boasts a powerful and fuel efficient engine, allowing to to travel at nearly 40 miles per hour on roads with a range of 340 miles without refuelling. The platform uses a blend of steel and composite materials in its armour, reducing its weight while strengthening its protection. The battle tanks delivered to Iraq also feature a number of additional defensive measures to enhance their survivability against anti tank weapons deployed in large numbers by insurgent groups. These defence systems allow the tank to detect laser designators and rangefinders to alert crew to the fact they are being targeted. Advanced explosive reactive armour and slat armour screens are also critical to providing additional protection. With the U.S. struggling to manufacture comparable defence systems for its own battle tanks, the military has turned to Israel to upgrade its Abrams platform with Trophy Active Protection Systems in an attempt to match the survivability of Russian rivals. With the T-90 being harder to destroy and costing far less to maintain than the Abrams, and requiring considerably less fuel and less maintenance which minimises pressure on Iraq’s fragile supply lines, the battle tank remains in many ways a superior option to the heavier but less survivable American made platform.