One of the first Iraqi vessels attack was the tanker Amuriyah along with a British made Mk 6 hovercraft. Several Mk 20 Rockeye cluster bombs ignited the Kerosene aboard her and the resulting explosion destroyed her. The hovercraft was sunk with missiles and cluster bombs.


During the Battle of Khafji an Iraqi amphibious force including 15 small craft attempted to cut off the city in Saudi Arabia that had been taken by Iraqi armored and mechanized forces. This operation was stopped by Coalition aircraft that sank three of them, the remainder took shelter in a Kuwait port that was off limits to Coalition bombing due to the risk of collateral damage, eventually permission was granted to attack them and 10 were sunk by aircraft.

Iraqi yevgenya class minelayer under attack by US aircraft. 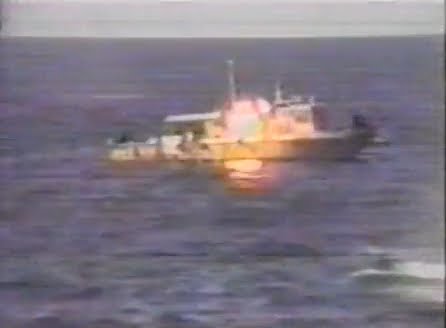 In the northern gulf area the Iraqis laid approximately 1,300 sea mines; two US warships fell victim to these both on February 13th within minutes of each other: the Missile Cruiser Princeton and the Helicopter Assault Ship Tripoli.

The Princeton fell victim to a Italian made Manta bottom mine in a area already declared clear of mines, the cruiser was able to limp back to port. - and was out of service for the remainder of the war.

Three crew were injured. The Tripoli hit a LUGM-145 mine injuring four sailors. The ship was out of service for the remainder of the war

USS tripoli aircraft carrier after the Iraqi navy damaged it and took it out of the fight for the remainder of the war. 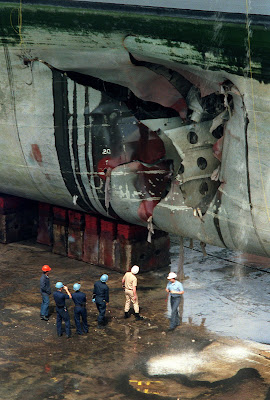 uss tripoli before the damage...