a Video about the Arrival of the last T6's

Success is not Final , Failure is not Fatal , it is the Courage to Countinue that Counts...

nice. now we need the 24 Lead In Fighter Trainers to go with them and the air academy is "relatively complete".
أعلى

"Every requirement was thoroughly discussed with a total understanding of what was required to meet the mission objectives by both the U.S. Air Force and Iraq air force," said Maj. John Creighton, the Iraq Training and Advisory Mission - Air deputy director of aircraft maintenance. "The Iraq air force and the T-6A program are well on their way to leading the country in the fulfilling role of developing Iraqi pilots and maintenance technicians."

Iraq air force officials planned and led the agenda to discuss the support and sustainment needed for the T-6 aircraft in Iraq. The discussion covered a myriad of training issues to include: pilot flight hours, aircraft maintenance, logistics and supply, precision measurement equipment and several other required support functions.

Just a few days after the conference, the first Iraqi air force instructor pilot to graduate from the 52nd Expeditionary Flying Training Squadron at Tirkrit Air Base, Iraq, Lt. Col. Hamid Hussein, flew his first official training mission with an Iraqi student pilot in a T-6.

There are 18 Iraqi students enrolled in flight training, and Hussein hopes to train 30 T-6 instructor pilots. This train-the-trainer goal would enable the Iraq air force to sustain flight training long after the scheduled U.S. transition out of Iraq in December.

"They are the foundation of the Iraqi air force pilot training," said Lt. Col. Andy Hamann, the 52nd EFTS commander.

Airmen from the 52nd EFTS have been working with the Iraqi air force for the last 21 months in the T-6, conducting primary flight training and instructor pilot training. The single-engine, two-seat T-6 is used by more than six countries as a primary fixed wing trainer, including the U.S. Air Force and U.S. Navy.

It takes nearly 18-months and more than 280 flight and simulator hours to produce an instructor pilot. Now, the squadron has 11 fully qualified instructor pilots ready to lead their air force by teaching others. Starting with nothing, the Iraiq air force has developed fully functional training shops ranging from training, standardization and evaluation, safety, flight commanders and life support.

"They've really stepped up to the challenge of running their own squadron," said Capt. Aaron Knight, an instructor pilot. "They're shining examples of good pilots and good officers. I'm extremely impressed with the maturity they have shown."

The flight standard that has been set is another aspect of the mission the advisers said they have worked hard to maintain.

"The standard we've held here as we trained the Iraqis is the same standard we use in our Air Force pilot training as well as the instructor pilot training," Hamann said. "I'm confident they are able to take this mission."

At the Iraqi air force T-6 instructor pilot graduation ceremony held on Sept. 5, Hamann said, "I hope that in the skies around this region and around the globe, our two air forces . . . and our pilots will fly together in missions beyond the training missions we are doing here; potentially humanitarian assistance missions and peace keeping missions in cargo aircraft, coalition operations and training exercises in fighter and mobility aircraft and as well as other missions."

In addition to their mission advising, training and assisting the Iraqi air force to grow foundational and enduring capabilities in flight training, U.S. Airmen have established enduring professional and personal relationships. with their Iraqi counterparts.

"What I'm most proud of are the relationships this squadron has built together," Hamann said. "We've had more than 50 individuals come through the 52nd EFTS over the last two years to train the Iraqis. The camaraderie on the flightline, in the briefing rooms and in the life support areas is really strong."

Ten more students are in the training pipeline now, and possibly 15 to 20 more will be by the end of the year, officials said. The goal is to eventually have 30 instructor pilots, two for every T-6 aircraft in the inventory.

"I've had a good experience working with the 52nd training squadron and learning from the expert American pilots," said Iraqi air force Abood, one of the first certified Iraqi instructor pilots. "(Now) I will try to transfer what I've learned to the new Iraqi training pilots. We will always keep the bar up. Our goal is to help build a strong air force and I think the beginnings of that will happen at Squadron 203." 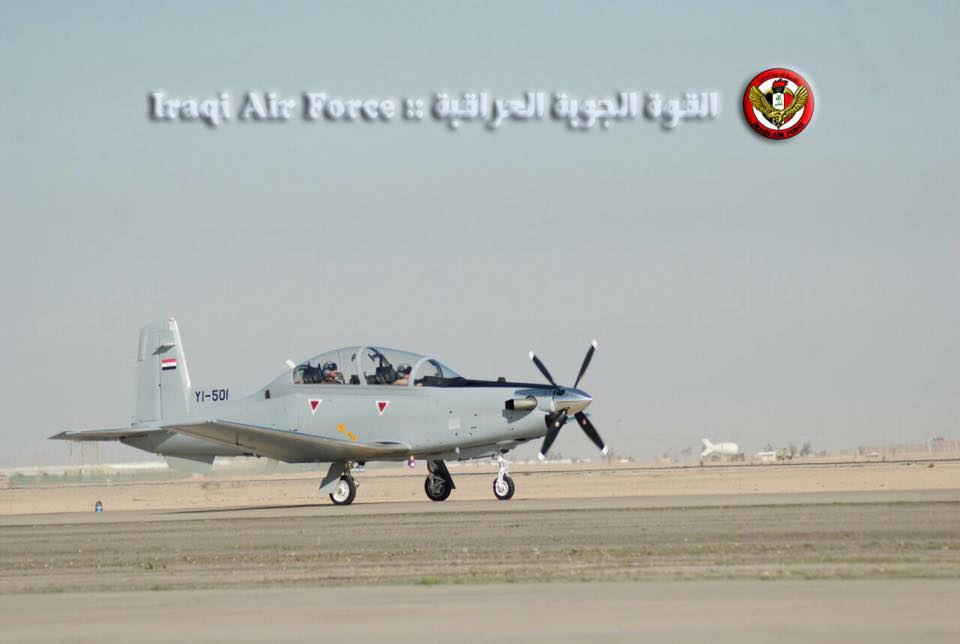 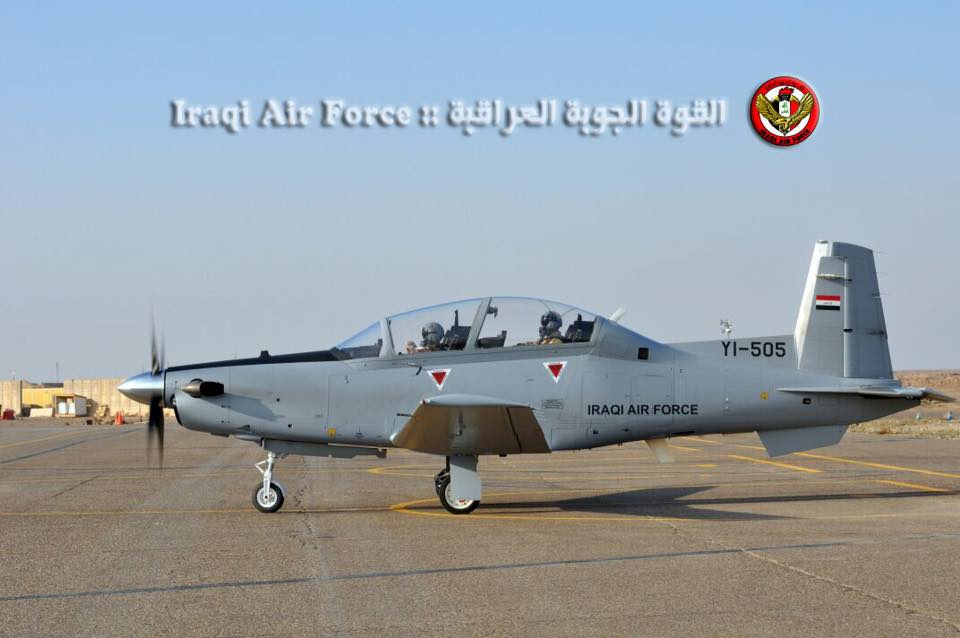 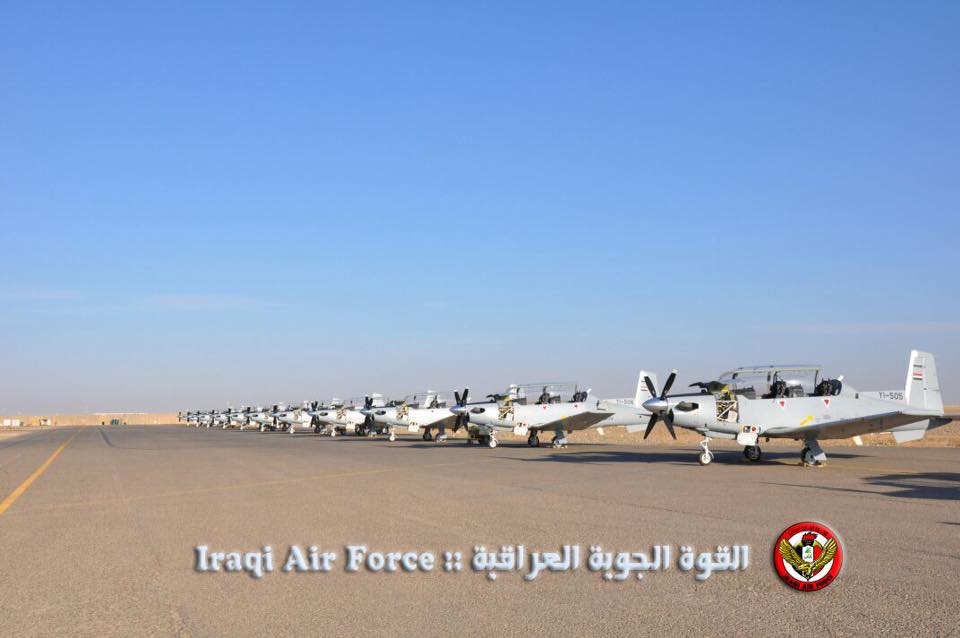 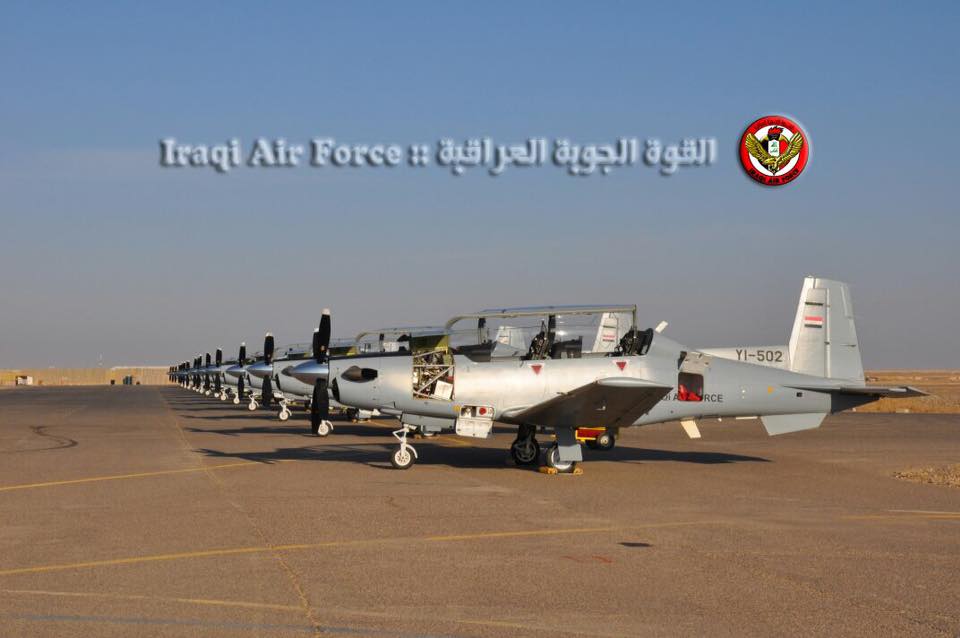 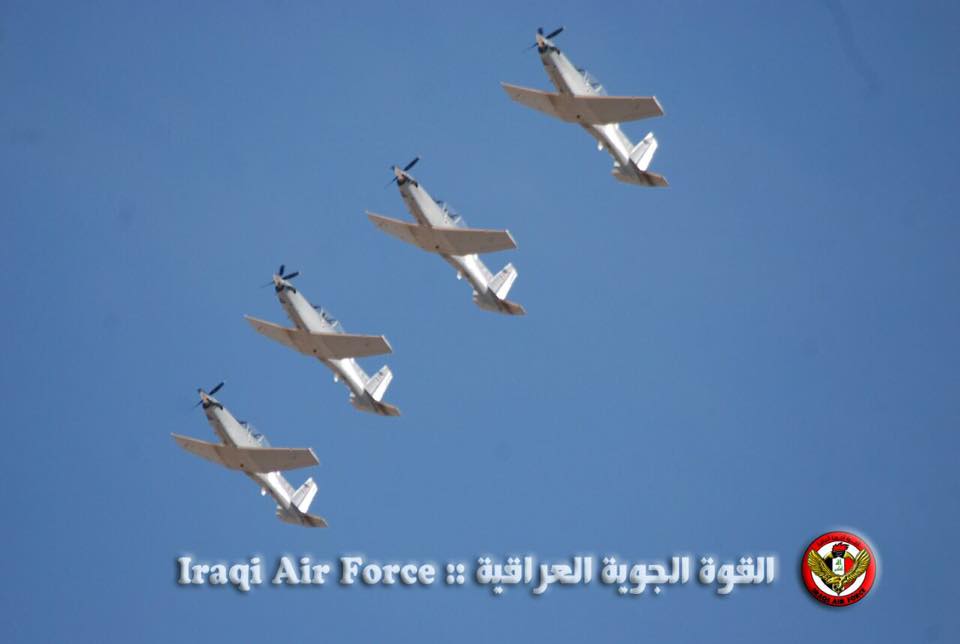 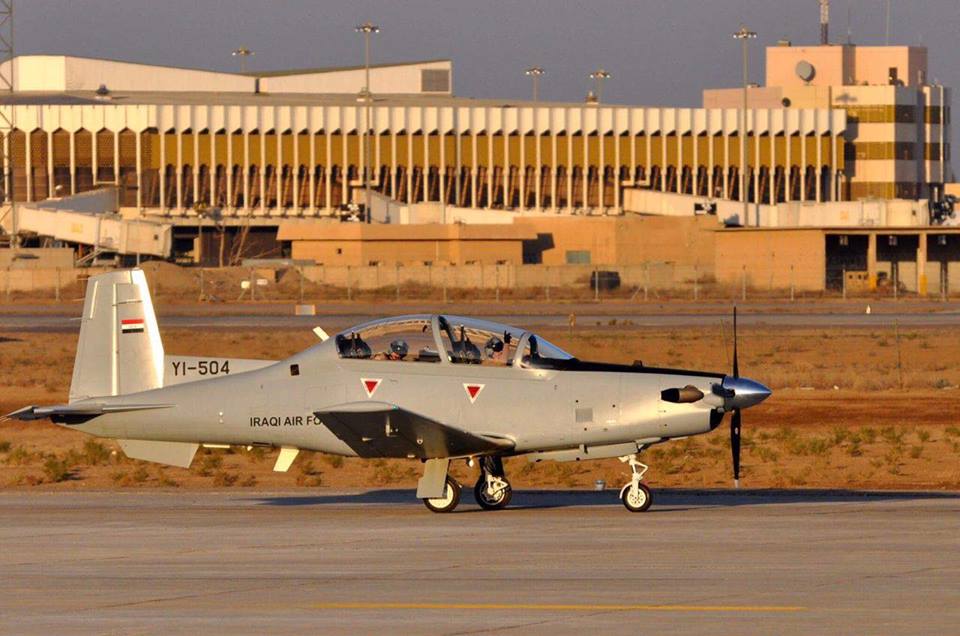 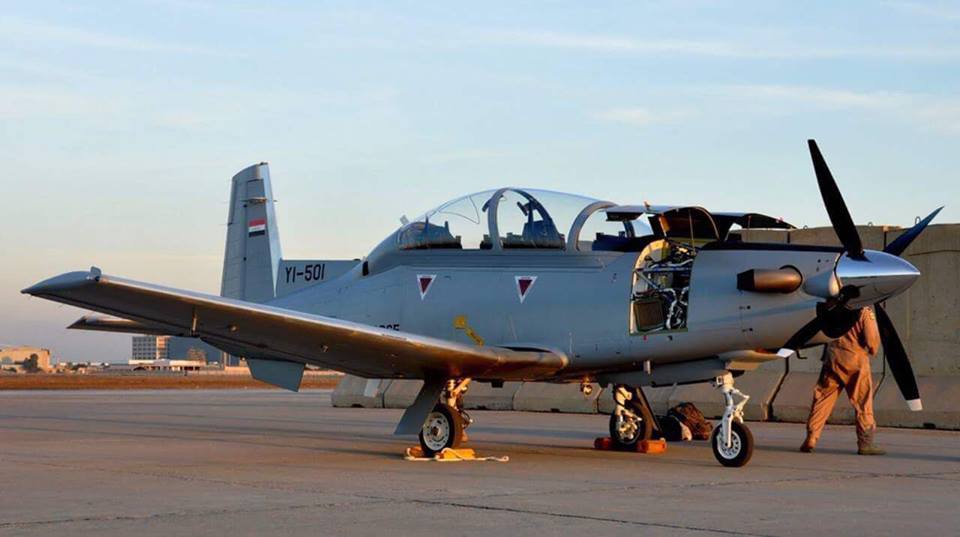 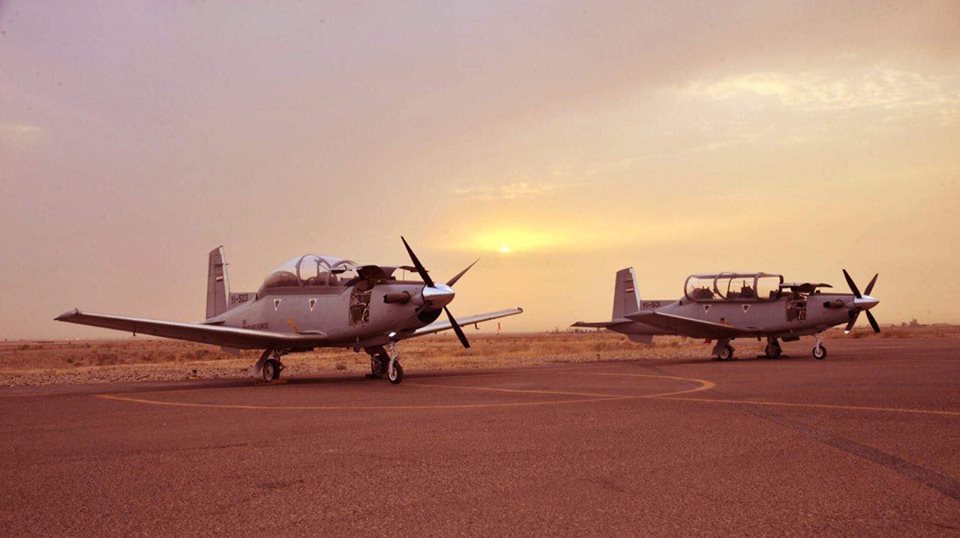 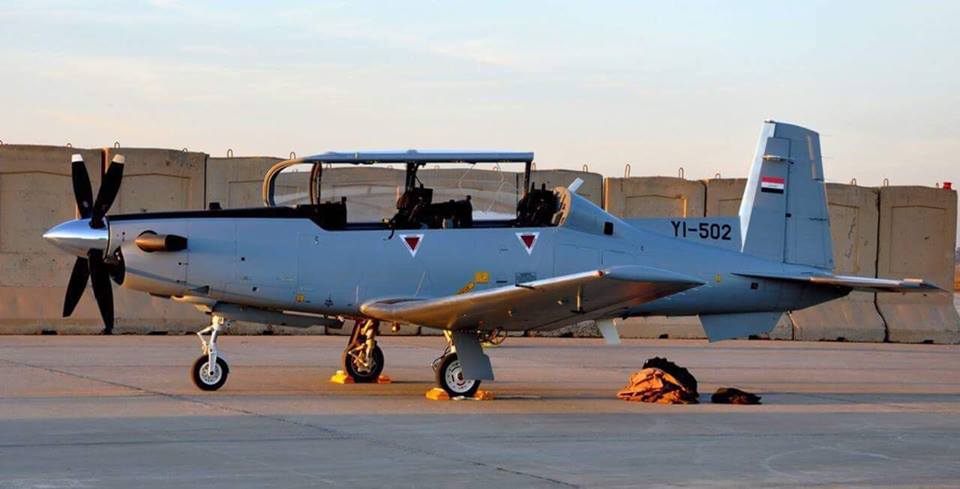 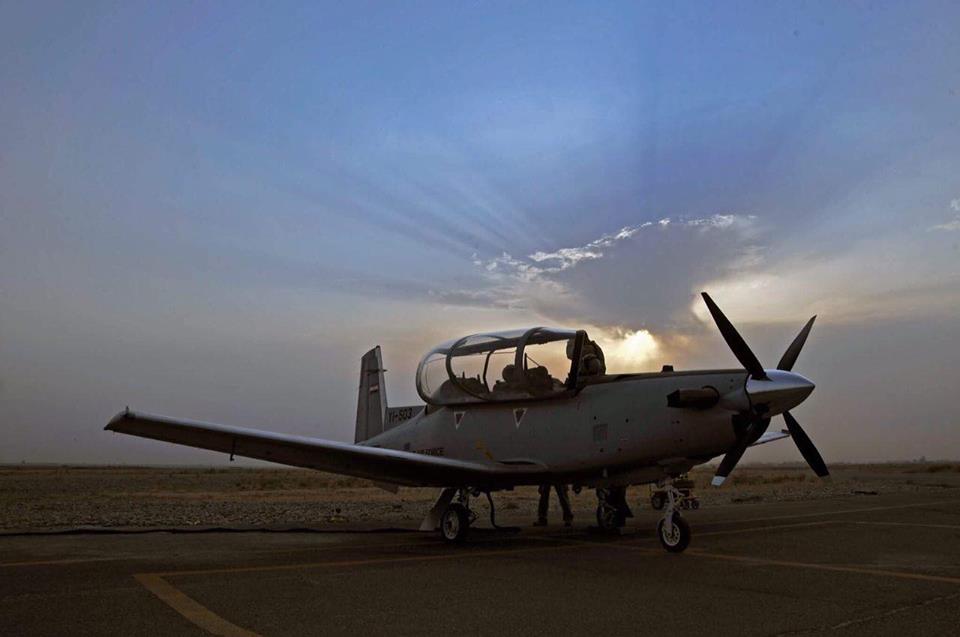 The article is confusing, the images posted clearly show the T-6s are active! Maybe it's a general overhaul before the start of F-16s in country training!
Per Ardua, Ad Astra.
أعلى

I really don't know what's going on with the T6 Texans. Recently they said that they have been reactivated again this autumn.

are they falling out of service regularly when the Iraqis don't pay the americans the extortionate service fees?

Just demonstrates the general incompetence in Iraq all round. After all these years they can't independently operate such a simple aircraft... which is pretty much identical to the PC-9 they operated since about 1988. 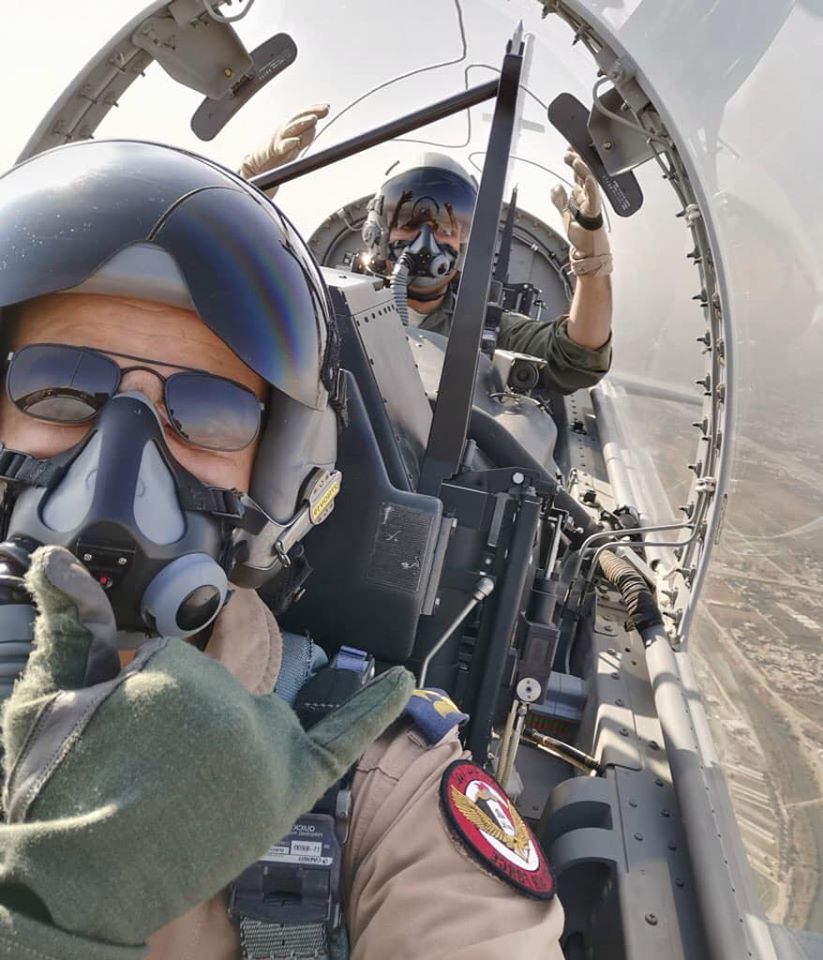 Spartan Air Academy Iraq LLC, Irving, Texas, has been awarded a $15,684,449 firm-fixed-price modification (P00007) to contract FA8617-20-C-6232 for the Iraq T-6A contractor logistics support and training maintenance program. The modification provides for the exercise of an option to extend the term of the contract for the continued services needed in order to effectively maintain and operate a fleet of 15 T-6A training aircraft. Work will be performed at Balad Air Base, Iraq, and is expected to be completed June 30, 2021. Foreign Military Sales funds in the full amount will be obligated at the time of award. The Air Force Life Cycle Management Center, Wright-Patterson Air Force Base, Ohio, is the contracting activity.

On 13 May 2014, the U.S. State Department approved an order for 24 T-6C aircraft for use as trainers by the Iraqi Air Force (IAF). The sale was worth US$790 million and was part of a larger one billion dollar deal. The Iraq Air Force’s (IAF) current trainer fleet consists of Cessna 172 Skyhawks and Cessna 208B Caravans. The IAF needs to supplement or replace its current trainer fleet with these new aircraft to modernize its air force and to facilitate its transition to the AT-6 light-attack aircraft. Produced by Raytheon Aircraft, the T-6A Texan II is a military trainer version of Raytheon’s Beech/Pilatus PC-9 Mk II.

Spartan Air Academy Iraq, LLC, is an affiliate of Spartan College of Aeronautics and Technology, which has campuses in Tulsa, Oklahoma; Broomfield (Denver), Colorado; Los Angeles, California; and Riverside, California. Support from these affiliated Spartan organizations allow Spartan Iraq to help establish an air academy with access to top flight curriculum and training expertise. Spartan College’s flight campus in Tulsa has provided training since 2007 as part of the Coalition Air Force Transition Team (CAFTT) and Air Advisor Program (AAP). This program includes pilot and maintenance technician training for Cessna 172, Cessna 208 and Beechcraft T-6A aircraft expected to be used for training at the academy in Iraq.